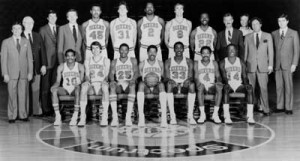 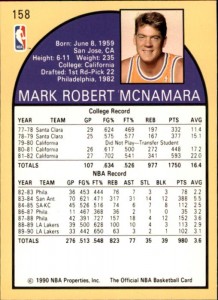 Following a standout basketball career at Del Mar High School in San Jose, CA, Mark spent two years at Santa Clara University (where he played with Kurt Rambis) before transferring to Cal in 1979 where he firmly entrenched his name in the Cal record book. He set a school mark by scoring at least 30 points six times, while shooting a school-record 70.2 % from the floor as a senior. Mark finished his Cal career with 1,041 points, becoming the first Cal player to reach the 1,000 point mark in just two years. His career scoring rate of 19.6 ppg and rebound rate of 11.6 rpg are 2nd and 3rd, respectively, in school history.

Mark led the Pac-10 in scoring, rebounding and field goal percentage as a senior – a feat matched only by three others (UCLA’s Bill Walton and Lew Alcindor and Arizona’s Ike Diogu.) He was voted first-team All-Pac-10 and third-team All American as a senior. According to Mark, “I am most proud of the fact I was a third-team All-American. I wasn’t much for individual awards, but, for some reason, that was a feel-good thing for me.”

Following his graduation from Cal with a B.S. degree in Political Economics of Natural Resources, Mark was the 22nd overall pick in the 1982 NBA draft by the Philadelphia 76ers. It was a memorable season as he played alongside Julius Erving and was the backup center to Moses Malone. The 76ers won the NBA championship in his rookie season and Mark still cherishes the memories from that magical season not to mention his championship ring.

After the 82-83 season, Mark had all the experiences of an NBA journeyman with stops the next 3 seasons at San Antonio, Kansas City, Milwaukee and Italy. He returned to Philadelphia in 1986 in time for Julius Erving’s farewell tour and finished his career with the LA Lakers in the 1988-89 and 1989-90 seasons where he played with Magic Johnson, James Worthy and Byron Scott.

According to Mark, “Having a journeyman career has given me a broad and unique basketball experience. I have played for and with some of the best coaches and players in basketball. I have played for or with 20 former or present head coaches. I have gained an invaluable amount of knowledge and experiences in how to be successful at any level of basketball.”

After leaving the NBA, Mark played for George Karl on the Real Madrid team in Spain. When his playing stint ended, Karl persuaded him to stay as a coach, working specifically with former Warrior Rickey Brown. He then became a teacher to big men. In Shaquille O’Neal’s rookie season, the Orlando Magic brought Mark to training camp, nominally as a player, but in reality as a coach for Shaquille. Mark recalls that Shaq was “super receptive” to his instructions and Shaq paid tribute to Mark in his book “Shaq Attack”.

One fascinating tidbit about Mark’s life is that he had a 6-week gig as the stand-in for Chewbacca in the 1983 film “Return of the Jedi.” According to Mark, “It was a real good experience for me. From there, it launched me into getting a role in the made-for-TV movie Ewoks: The Battle for Endor. I did a lot of the stunts for the main characters. It was one of the most exciting things I have ever done.”

In the mid-1990s Mark had a recurrence of encephalitis which he first contracted from a mosquito bite while backpacking in the Sierras as a high school freshman. Doctors told him to slow down or he would die. He was later diagnosed with the genetic disorder Alpha-1.

So, Mark headed to a cabin in Strawberry, CA that he and Cal Beta brother Robert Erdmann ’79 had bought together, along with his pet wolf Gaia. Once fully recovered, he joined the National Ski Patrol as a volunteer and eventually earned a spot on the paid patrol at Dodge Ridge Ski Resort.

Mark will be inducted into the Cal Athletics Hall of Fame in November 2016, one of only five SAE Cal Beta alumni so honored.